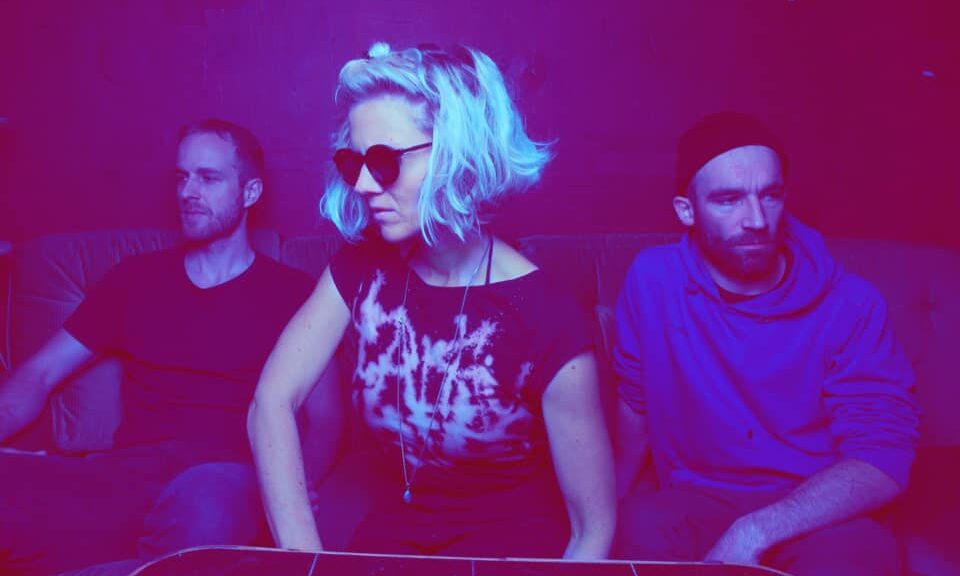 Maryanne Shewolf heads this deep and dark bluesy  trio from Bern, Switzerland, along with wolf pups Fabian and Mige. The songs captivate, embrace you with their moody swagger. In this interview, Maryanne shares how Honshu Wolves came to be, in Zaffaraya – an alternative trailer park, and how she had that creative something inside that just needed to be born.

When and how did Honshu Wolves form?

The band Honshu Wolves was founded in 2007 by myself, together with our neighbor Emanuel. Actually, I asked him to teach me how to play the guitar, because I wanted to have an instrument to go along with my voice. But I was very impatient and wrote my first song shortly after the first few lessons and I asked him if he wanted to play with me. So that’s how the group was born.

I was always surrounded by people playing in bands, but I became a mother very young and didn’t have the urge to have my own group before, so much. But after the kids grew a little bit older, I had the feeling that something wanted to come out and I wanted to dive into a new creative dimension.

After some months we met through a friend our drummer Mige. And we played as a trio, my voice, two guitars and drums.

In 2011 we released our first record, the 10” ‘shine on me’ at the Geneva label Moi J’Connais from Mama Rosin.

Emanuel, the guitarist, moved into another city to study and also didn’t like performing live as much as I did and he decided to leave the band around 2012. We asked him to record the newer songs we have been playing together before he left and he agreed.

We released our second record and first long play album ‘Silver Ashes Line The Lane’ on the label Sacred Hood Records from Biel in 2014.

Just after the recordings we fortunately met Fabian who replaced Emanuel.

In this formation we are still playing now.

Tell me about your musical evolution, personally and as a band.

I think I started very late with the idea to have a band. I tried out other things before, as a kid and teenager, sang in choirs and was in a musical company, but this was not the thing I wanted to pursue. I played the piano, but only classical music for several years. I still like it, but only to play for myself.

Because my older brother and his friends always had bands I was actually surrounded by people playing in groups. But somehow I didn’t like the idea to just be the singer of a group, cause I didn’t play a ‘band instrument’. Girls forming their own group was not so common then. Some years later I had a girl band, but only formed for a project for one cover song. Out of that some of my friends wanted to play with me, all girls. I couldn’t play the guitar, but played it anyhow. But we didn’t find really a consensus and split.

Then I didn’t play for a long time. I became a mother at 20 as I moved to Zaffarya.

7 years later Emanuel became our neighbor and I decided to form my own group, with my songs. I wanted to sing how I just feel like and play music that touches me or moves me while playing.

There with the group I started with very simple things. I didn’t play the guitar before, so played a blues open tuning and didn’t want to waste time.

I liked Jessie Mae Hemphill and gospel, but also the Velvet Underground and space. I think I mixed this in its simplest form and that’s how it still sounds today in a way I would say.

Of course, I want to evolve the songwriting all the time. As best I can. But it’s still simple. I like clever songwriting and sometimes analyze songs I like. But for myself I don’t write songs with a plan …what I want just comes.

We really became better playing together. In good phases we understand each other blind and match very well.

What/who are some of your influences – music and non-music related?

For what music I know and love, I have two important influences, one is my elder brother and the other is my partner, Christian.

I think a lot is still based somehow on the blues.

And it was always music, that touches me somehow somewhere.. In very different ways and styles.

Some are beautiful, some are painful, some are groovy, some are trippy, some are crazy, there are a lot of possible ways music can touch me. That’s what I also want with my music, I want it to touch myself and others.

I am a very visual person, as well. But there I cannot really name what influenced me. I think there are a lot of things, but more unconscious. Movies, nature, paintings, patterns, clothes.

How does living out of Zaffaraya trailer park in Bern have an influence on your music?

If it really directly influenced my music, I cannot say. It’s a special place to live and to live there is for sure one reason why I was able to find a group besides my task as a mother. Because we built ‘our house’ all ourselves, life is cheaper, and I never had to work 100%. That doesn’t mean it is less work after all. And it is without luxury, so you need to stay flexible.

How have you navigated being a band leader as a woman? Any difficulty/challenges?

In my “surroundings” it was not very normal to lead a band, with song writing and being the boss as a woman. But my friends always supported me and I felt respected. And honestly, I never cared about things like that. If I want to play music, I do it.  But sure, to arise is still not always easy. I am not always full of self-confidence and I am going forward in small steps. I needed some time to write on the records: all songs written by me.

And sometimes it was really like this, that I felt I should play so much better to prove that girls can do this too. The saying: ‘not bad for a girl!’ really exists! And earlier in the beginning, sometimes I had to make clear, that I can manage the controllers of my amp myself, haha. Except Fabian, he is the best and my technical help!

But this is a long time ago and I no longer have bad experiences leading a band as a woman.

How did you get on Voodoo Rhythm Records?

Oh, Voodoo Rhythm is very known in the underground scene in Bern and all over Switzerland. And my partner’s band, Roy And The Devil’s Motorcycle, they’ve put out their records for a long time. I know Beat-Man (the label’s head honcho) for a very long time now.

But for the record he was the one who asked us when will  we have a new record, and that he would be interested to put it out. This made me very proud. ‘Cause as I said, I am not always very self-confident and I wasn’t sure if my music will please a lot of people.

Can you talk about how you put Cosmic Creature Capture together? How does it compare for you to your other releases?

It’s been our actual songs from the live set. Some were quite new like Something’s In The Air and some older like Tell Me. Come Closer was written in the studio during the recording sessions.

What instruments and effects are you using on this record?

Our ‘standard’ line up is two guitars and the drums and sometimes the little lovely trash organ Casio Tone.

For the recording session we had also a bass with us and our acoustic guitars. The studio itself had several instruments we used, like the piano and percussion stuff.

The owner of the NoMad studio, Ezra Nomade, built a plate for the reverb effect, which we liked a lot for the voice, but also for the instruments.

Who did the striking artwork/design for the album?

Joana Hermes, a young talented dancer, and creative lovely person, and at this time my oldest son’s girlfriend, made a collage in black and white after my idea and wish to have a woman with two faces. She cut out the whole thing by hand – beautiful!

This collage we digitalized with the help of Claudio Marchegiani (also a friend of my oldest son, Louie) and made the layout together with him. Some things I decided alone and with some I let him more ‘free hand’.

Are there any important messages in your music/songs? Where do your ideas come from?

For me it’s important to create a feeling with my music. First it is a feeling from inside something the music does with me. But then it’s transforming to a feeling outside which can reach the listener if he wants to and can dive in. The music can take you with it and you can live through different feelings… I hear or feel beauty, but also danger, silence and fragility, but power too… If somebody is coming into this flow, I feel myself with my music, it gets into my ‘inner’ rhythm, and that makes me happy.

Some lyrics have a message, some only describe feelings and form a picture, some are telling a story.

Where have you toured? Any favorite places/venues/cities to play?

Till now we toured twice in Italy, played once in France and Romania. And we toured in Switzerland of course, haha.

Because I have three kids and I have a day job to feed them, we couldn’t go on tour so often.

In Italy we have a lot of lovely friends now and we would like to go back as soon as we can!

But yeah, we have some more cool contacts abroad now and for sure we want to go there when the pandemic-situation will be less difficult.

I think we will meet good people everywhere. That’s why I couldn’t say: there I have to go ‘absolutely’.  Until now there was no place we didn’t find cool and sweet people! That’s the thing I love the most  about touring.

What has been happening in Bern music-wise since the pandemic? Is the music scene shut down? How have you adjusted to everything?

All clubs have been closed for more than one year now. We didn’t play live for a long time.

The musicians who really make their living from music are in a very difficult situation!

Now, it slowly starting with small things happening outside.

Our first gig will be in the beginning of July, also outside.

And then we hope that we can make our release party – finally!!

It will be end of summer in our residence club in Bern called Rössli at the Reitschule, an old autonomic center for culture.

What is next on the horizon for Honshu Wolves?

As soon as possible we will play small gigs in Switzerland and as mentioned above, we will catch up on the release party.

Two new videos are in the making and we will print new merch.

Touring we don’t know yet, if it will be possible this year.